Which are the startups innovating the Middle East?

The first ever Aviram Awards in Dubai showcased the many start-ups in the Middle East aiming to make humanity better. 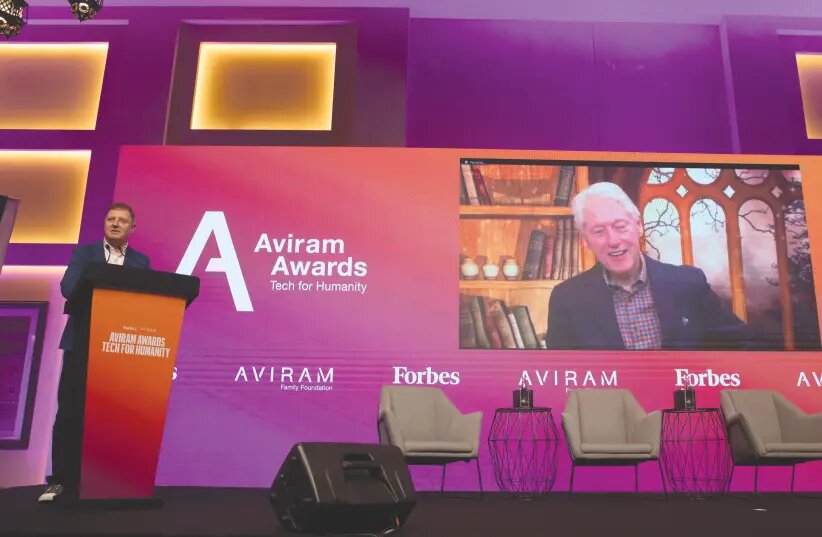 DUBAI – On Tuesday the first-ever Aviram Awards – Tech for Humanity competition was hosted in Dubai, bringing attention to the many start-ups in the Middle East with the potential of benefiting humanity and creating positive change through entrepreneurship.

The awards were run by the global financial magazine Forbes and the Aviram Family Foundation, founded by Israeli entrepreneur Ziv Aviram, who is no stranger to innovation and making a positive impact.

Aviram first made waves by co-founding Mobileye, an Israeli company that developed autonomous automobile technology. Today, many of its products, such as its collision detection software, are used by cars worldwide and are helping to make the roads a safer place.

The company’s success was later highlighted by its acquisition by Intel in 2017 for $15.3 billion – the largest-ever acquisition of an Israeli hi-tech company.

Afterward, Aviram founded OrCam, a company that produces technology to help people who are visually impaired, improve their lives. 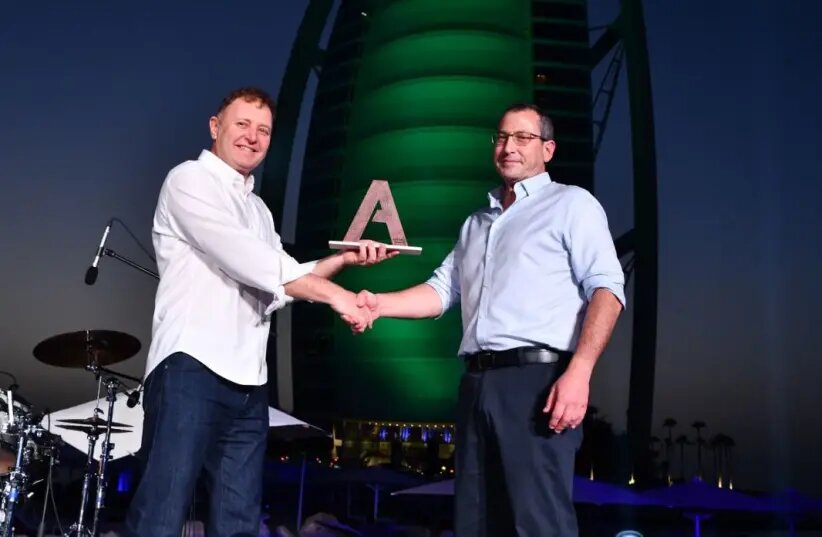 Now, Aviram is out to help promote other start-ups looking to make a positive impact on the world, and the Aviram Awards are a way of doing that.

After submissions were accepted from over 650 early- to mid-stage start-ups from all over the Middle East, the numbers were thinned out to just five finalists from Israel, Jordan and Morocco for an extravagant final competition and award ceremony in Dubai.

Choosing Dubai as the location for the awards was no accident.

Aviram was in part motivated by the Abraham Accords, the peace treaty signed between Israel, the UAE, Bahrain and Morocco, officially normalizing diplomatic relations between them.

This was a game changer for the Middle East, and the geopolitical ramifications of its signing are highly significant.

But equally significant is the opportunity for business. Indeed, business deals and memorandums of understanding between Israel and its new Arab allies began forming in rapid succession after the ties were announced, as companies sought to expand.

Dubai is also a major business center, a wealthy and opulent cosmopolitan metropolis that is famous worldwide for its retail trade, ports, luxury goods and more. As is the case with the rest of the UAE, the vast majority of its population is composed of not Emirati nationals but immigrants. This highlights the diverse and welcoming nature of the city, and is a reflection of the growing openness that the Abraham Accords represent.

And Aviram certainly sees this competition as aiding in the peace process.

“It is a nice addition to what we do as businesspeople, strengthening peace, building bridges and creating this peace, not just on paper,” he explained.

Aviram isn’t the only one who thinks so. Speaking via Zoom, former US president Bill Clinton fully agreed with the efforts of using business and entrepreneurship to foster peace.

“I sincerely hope that in all the countries in the region, there will be projects identical to the one you set up,” he told Aviram. “We see these ventures as a platform for advancing peace.”

BUT ASIDE from advancing peace, regional innovators can also help fight some of the other growing challenges in the world, which is especially notable considering how vital the Middle East has always been in an energy-dependent world.

The region is famous for its vast supply of oil and natural gas, and can be considered to be the fossil fuel capital of the world. But that is only scratching the surface of its potential.

The Middle East and North Africa have incredible potential for solar power due to clear skies, open deserts and heavy sunlight. Two of the world’s largest solar power plants are located in the UAE, and the country is looking to invest $163b. in advancing a sustainable economy, as reported by Deutsche Welle.

According to the official UAE energy strategy, the Gulf country hopes to sufficiently advance its energy production in the coming years, slashing its carbon footprint by 70% by 2050.

These aims are in part due to necessity. Oil and natural gas reserves won’t last forever, and the effect fossil fuels have on climate change is incredibly damaging. As such, it is essential for Middle Eastern states to diversify their energy mix and economies through innovation and adaptation.

The world is taking notice of all this, especially in light of the ongoing Russia-Ukraine war, which is seeing many countries trying to end their dependence on Russian energy.

It is for this reason that, earlier this week, Germany signed multiple green energy deals with the UAE and Qatar, as reported by Deutsche Welle.

The Middle East also has to innovate in other areas, such as water. That’s why the region is a major user of desalination technology to provide a clean water supply.

And, of course, Israel has a reputation as the Start-Up Nation for good reason, as the Jewish state has long been a home to innovation in everything ranging from hi-tech to agricultural innovations such as drip irrigation.

SO WHAT KIND of start-ups were on display at the awards?

First was AKYAS Sanitation, a Jordanian sanitation start-up that has developed a sustainable toilet system that needs no prior infrastructure and is ideal for places like refugee camps and for dealing with a global sanitation crisis.

Next was Beewise, an Israeli start-up that aims to revolutionize beekeeping through the use of artificial intelligence and automation. Since bee pollination is responsible for an estimated 75% of all global produce, not just honey, and yet bee numbers are in heavy decline around the world, this is a technology that can help people all over the world while also providing a sustainable profit through renting out the company’s automated beekeeping units.

Third was Biotic, an Israeli start-up that is seeking to commercialize a sea algae-based biodegradable polymer developed by Tel Aviv University as a sort of plastic alternative.

Fourth was Moroccan start-up BMTA&C, which developed a solar cooling system to save food from being lost after harvests, promoting food security and farmers’ incomes while also fighting climate change.

But the fifth and most ambitious start-up was Israel’s RedC Biotech. This company is developing means to produce universal red blood cells, which would essentially revolutionize the entire medical field as we know it and solve the blood shortage which has seen millions die of blood loss every year.

In a competition that bears similarities to the popular TV show Shark Tank, each start-up had five minutes to make a pitch before the team of judges and then another few minutes to answer questions.

Unsurprisingly, RedC Biotech won top prize, taking home $500,000, thanks to Aviram’s personal involvement in its efforts and the support of Forbes.

It makes sense that RedC Biotech was chosen, considering its potential for profit and for benefiting humanity.

“Which company benefits society? Not philanthropy companies but business companies,” Aviram explained regarding the contest. “Their products can benefit humanity in as broad a scale as possible.”

Indeed, despite all the talk about benefiting humanity and making a positive impact on society, this was still first and foremost a business event, so profitability was still of paramount importance.

But according to the organizers, this isn’t necessarily a bad thing. In fact, they believe this business-heavy approach will make things better and more efficient rather than relying on nonprofits, NGOs or government institutions.

Take AKYAS, for example. Its CTO and co-founder, Bara Wahaba, was a humanitarian volunteer who volunteered in Yemen, where he witnessed a cholera epidemic made worse by poor sanitation.

“There was no good solution from the supply chain people and logistics for fast portable toilets,” Wahaba explained.

“Unfortunately, the conversation isn’t at the right level yet, because no one wants to talk about poop,” Wahaba explained.

Indeed, despite the fact that AKYAS’s technology has had successful rollouts already, is easy to set up, is sustainable and does not require existing infrastructure, it has had trouble rolling out in many places.

“It’s very hard to penetrate the NGOs’ or UN agencies’ supply chains. We spent three years trying,” Wahaba said. “We need to move forward. We proved it works, so now we need to work on a business model.”

And it seems that his efforts may indeed bear fruit, as AKYAS won second prize, amounting to $100,000, at the Aviram Awards. Now, the company is planning on entering the market in India and Bangladesh.

This highlights how despite trying to be a profitable business venture, start-ups can still work to make a serious positive impact.

Clinton summed it up best. “There’s nothing wrong with a profit motive, but that profit has to benefit everybody.”